This is the first of a series of articles on the subject of basic Shotokan stances. I will review other stances in future articles.

Zenkutsu-dachi is the most common basic stance utilized in Shotokan practice. In many training sessions, this stance may be used more than all others combined. It is obviously a very important stance and worth some study. 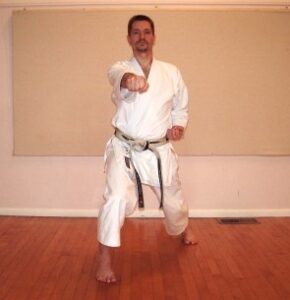 In general terms, the feet are situated roughly twice as far to the front as to the sides.* Often, instructors will tell students that the stance should be two shoulder-widths long by one shoulder-width wide. Many students (especially men) misinterpret this and measure the width of the shoulders to extend all the way to the edge of the muscles around the shoulder, and place their feet at or outside of this width. In defense of some students, many instructors do not correct their students’ inaccurate measurements, as they also may have misunderstood when they were students. Perhaps those instructors’ instructors also did not clearly explain to them that this may be too wide (more on why this may be considered “too wide,” below). Measurements such as this should be taken between joints. The side-to-side distance between the ankles should be approximately the same as the distance between the shoulder joints.  Ultimately, though, there are acceptable variations depending on a multitude of factors, including flexibility, desired mobility vs. stability ratio, and relationship with the opponent(s).

So, what is ideal if it is not the basic 2 x 1 stance configuration? How do we know if we are too low or too high while performing our front stances? (when in doubt, most of us are probably too high) How do we know what is a good blend of stability and mobility?

Let’s briefly review the idea of alignment, which I cover in detail in my article by that name.  Place the legs such that the back leg is stretched and the front leg is bent to where the front of the knee is over the front of the big toe, approximately 2 shoulder-widths long by 1 shoulder-width wide. (A common mistake is to push the front knee out too far to the outside; please again see my article on alignment as well as the one on inside/outside stances for more on that subject). With this stance configuration, the lines described by the lower portion of both legs should intersect roughly where your punch would meet the target directly in front of the body, with the arm fully extended, at around chest level. If this is not where the intersection of these two lines is, according to proper alignment theory, the stance should be altered. Many people cannot situate their legs to conform exactly to the ideal front stance (especially when considering that the feet should both be pointing directly toward the front, with the knees and toes always pointing the same direction). Depending on one’s limitations in flexibility, agility and strength, “perfect” technique may not be attainable. But it is probably a good idea to at least strive toward these goals, realizing what is given up by each compromise.

As for where to place the front knee in relation to the front foot, many instructors incorrectly explain that this is an “outside stance” and the front knee should therefore be pushed forcibly outward. The knee should actually be in a natural position, pointing in the same direction as the toes, very likely more toward the inside than the outside. If you look straight on at someone in front stance, you should see his legs are in a normal/natural alignment, with the knees being slightly further away from one another than his hip sockets and his feet being slightly further away from one another than his knees. It is essentially a straight line from the foot, through the knee, to the hip, on each leg, as viewed from directly in front, from floor level. (more photos needed)

Mobility
While you may be more mobile in a higher stance, what is lost in stability will often make this added mobility unworthy of the lack in strength/stability. The properly aligned stance should be a near optimization of the two attributes, providing both mobility and stability.

Variations
Now, let’s consider how changes in length, width, height, foot angle and weight distribution effect the stance. Some of these points are also discussed in my article on jiyuu-kamae, which considered variables in the “free” stance.

Leaving all other variables as they are, try changing the front stance such that the distance between the feet is more or less than 2 shoulder-widths, when measured front-to-back. Separately, try altering the distance between the feet side-to-side. Then, don’t bend the front knee so much. Try bending both legs more. Try spreading out the directions the feet point; then turn them in towards each other. Finally try varying the position of the hips/torso in relation to the feet (proper alignment dictates roughly 75-80% weight distribution toward the front). Study of these variations should help you to determine what part each variable plays in making a good stance, as well as to decide how you may want to alter your stance from the most basic version for certain circumstances or considering your physical abilities or limitations.

Strength and stability
When is the stance strong or more stable? Probably when the base of support is wider (to a certain extent, at least). When the feet are closer together, some stability is generally lost. How does weight distribution affect stability? It depends on what angle is being considered. With the torso situated further toward the front, the stance is usually more stable to the front. But this is perhaps more a factor of the back leg being straight than the placement of the weight…

Mobility
How about the ability to move within/from the stance? When the feet are closer together, you may be able to move faster. When the feet are apart, you are generally slower. Weight distribution effects again depend on the angle in consideration. When the feet are both facing forward, the performer of the stance is probably both very stable and mobile towards the front. But what about to the sides? For this, perhaps the feet should be angled outwards…

While it is important to study the static stances, it is also important to realize that, in reality, one should not expect to remain in any one stance for more than a second at a time. Stepping, shifting, turning, rising, falling and other motions come into play from the basic stance. One should consider options from the static stance. Some of the abovementioned variables may become even more important when considering what comes before or after.

When stepping forward/back, there are generally two methods of foot movement taught to Shotokan students. In one method, the moving foot comes inwards to touch (or nearly touch) the unmoving foot. This is sometimes referred to as “C-stepping,” referring to the shape of the course the foot takes. In the other method, the foot moves directly forward/back in a straight line, without coming in to meet the unmoving foot. There are advantages and disadvantages to either method, depending on many factors. Also, these two methods can obviously be blended, such that the moving foot moves only partway inward. For more on C-stepping, please see my article on that subject.

Another point worth consideration is the relationship between the pull and push of the legs. Do you pull from the front leg, or push from the back leg when stepping forward? Or do you do both? If you do both, is it both at the same time, or first pushing, then pulling? There are, of course, acceptable variations. But, generally speaking, there should be a combination of both pushing and pulling forces at work during the stepping motion. If the weight is further forward, the reliance on the pull portion increases, vis-à-vis the pushing action, at least for the initiating action. Likewise, when stepping back, the importance of the push off the front leg increases, as the weight is situated closer to the front than the back in front stance.

The above can be further complicated when considering movements to directions other than directly to the front or back. Those used to “C-stepping,” for example, may find it easier to change direction midway through the step, as compared to those used to always stepping directly forward and back. Those wishing to be stronger to the side may want to assume a wider stance. While those who want to be prepared to shift or shuffle their feet quickly may want to bring their feet closer together. But, while training in front stance, there is a standard that we should keep in mind. “Free stance” is free. Front stance is not.

There are obviously many factors that should be considered when evaluating what “ideal front stance” might be. I suggest experimenting to determine what is both best for you as an individual in an ideal situation, as well as what might be best considering the variables involved. There are acceptable variations. But there are some variations that may not be advisable or accepted. As usual, for students, I suggest further discussion with your instructor(s) for clarification and more physical examples. For instructors, I hope this helps promote further technical study and possibly provide new ideas on what/how to teach or explain technique to students. As always, feel free to contact me with questions or comments.