(This article originally appeared in the August 2006 issue of Shoto-Mag.)

Some of us, particularly those who are teaching others, often do not have enough time to train with other people, as much of our time is dedicated to helping others improve. And even when we do get a chance to work out, we are usually still focused on the students and may not be able to think about our own improvement as much as we would like.

In this article, I would like to introduce several ideas for self-checks for teachers, as well as students who may not have enough time to come to the dojo as often as they would like.

First, I would like to remind everyone that thinking about karate can greatly increase the efficiency of the learning process. Doing repetitions mindlessly may be a good workout. But improvement through mindless repetition training may be limited. Thinking alone is also of only limited value; physical training is crucial for improvement. The best way is to combine the two. Think as you do.

There are many ways we can involve our minds into our training schedule. We can read books, watch videos and have discussions with others. In Funakoshi’s time, books were even hard to come by. These days, we have more information on the internet relating to Shotokan than there was information in all forms on all martial arts put together only 50 years ago.

While reading about others’ experiences and watching tournaments on tape have it’s value, what we will be looking at in this article is specifically how we can think about our own training. The same resources are available for this purpose as well. We can keep a training journal, we can videotape our own performance and we can discuss our own technique and training ideas with others.

There are various ways we can look at ourselves to check our technique. One of these is by simply looking down. This has its value, but has many potential problems.
• Posture may suffer, especially if it becomes habitual
• Focus leaves the opponent (imagined in basics, but potentially real)
• Errors may be subconsciously corrected during the process of looking down.
• This is not usually the angle from which an opponent would view your technique, so the value of that view is limited.

A better way to look at ourselves is in a mirror. A full-length mirror is of course the best, to see the movements of the entire body, even if concentrating on one small movement at a time. For the most part, the abovementioned points are not a concern when looking in the mirror.

The best way to look at ourselves, however, is on videotape. Of course many instructors, including myself, tell students this. But how many of us follow our own advice on this subject? It takes time, a suitable location, proper equipment, good lighting, the proper angle from which to film…If we had that much time, wouldn’t we just go to the dojo and have a more thorough training? What makes video so valuable is that we can store the images. Not simply to show your grandchildren…We can review the same tape with various ideas in mind, to see if we were making a certain mistake that we were probably not considering at the time of filming. When looking for errors by looking down or in the mirror, we have certain points that we are checking. With video, we can catch ourselves on various points. You may record yourself initially thinking you would like to check if your heels are coming up as you step back. While watching the replay, you may also notice that your posture is going off or you could decide to check hand/foot timing and other details you were not consciously thinking of as you were being recorded. 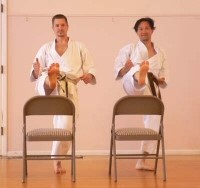 It can also be very valuable to incorporate a variety of equipment in our training, such as a makiwara, heavy bag, or objects that we may kick over top of. These can all be used while training alone to give unbiased feedback.

At this point, I would like to show a few examples of a category of self-check method of training I sometimes use. This training requires little space and does not require a partner. It can be a great way to check for some bad habits, and is particularly useful if you only have a few minutes.

Face the wall such that both your feet are no more than 6 inches from the wall. Turn to the right into front stance, keeping both feet within about 6 inches of the wall, and extend your left arm for reverse-punch.

Hold your hand within an inch or two of the wall. Return the fist to the left hip and punch again a few times. This is primarily to check if your elbow is going out on reverse-punch. Now, let’s try to the other side to make sure we work on both sides. Next, alternate. As we speed up, it becomes more difficult to keep the elbows from coming out but the wall helps tell you if you are doing this. Also watch that you are not poking the hips back during the transition in an effort to help distance yourself from the wall. See video clip 1 for an example.

Next, start the same way and do a front-kick. Again, as we advance to alternating sides, it becomes more difficult to do correctly, without letting the kicking leg go out as a result of the inherent centrifugal force.

Ushirogeri/back-kick: Face away from the wall and turn around towards the wall as you kick. For more difficult practice, if you have access to mats or other large objects, you can arrange a few of them together and kick between them. This is a great way to work on accuracy of the kick but particularly to make sure the kicking path is straight. See video clip 2 for an example.

Mawashigeri/round-house kick: Face away from the wall and kick with the right leg to the left of you, then alternate. The is a good way to make sure that you are following through properly to a more realistic depth than we often employ when doing controlled kumite. See video clip 3 for example.

There are many other ways to use the wall for self-training, including target practice involving precise control of attack depth. Also, we can check our stances, such as bending the front leg against the wall in front stance, checking to be sure the knee stays still as we turn the hips between shomen and hanmi. Or, put the back leg against the wall in back stance (see photo). Or, turn to the side in back stance and practice shuto-uke, making sure the body parts are properly aligned and the entire blocking arm is almost flush against the wall.

There are various other possible self-checks that we can perform while training by ourselves, including target practice for distance, timing, or impact checks. Training with inner-tubes was covered in a previous article on ShotoMag. And we can work on altered kata to reach a greater depth of technical and application understanding. What I have introduced and reviewed here are just a few of those that I use and/or teach. My hope is that people will continue to train when they can and work toward self-improvement, independently if needed.