On the Value of Tournaments 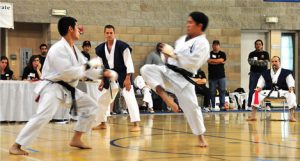 Tournaments can hold different value for different people. For some competitors, they are a chance to test how good one’s kata or kumite looks compared to others of similar rank. For some spectators, they are opportunities to get a better idea of what is possible in karate. For some instructors, they are a motivational tool to try to get students to train harder. There are various reasons to consider getting involved in tournaments. While there are some who believe tournaments have no value and avoid them completely, there are others who seem to focus on competition to the detriment of training itself. 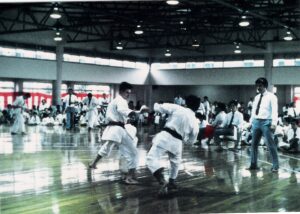 I have had my share of tournament experience. I have competed in various Shotokan and multi-style tournaments in Japan and the US, including several All-Japans representing Tokyo (which requires placing in the top 8 in the Tokyo tournament). I have additionally watched numerous national and international competitions and have dozens of them on videotape. I have acted as a coach. I have been a corner referee and a center judge. I have helped with tournament organization and promotion. All of this, and I do not consider tournament competition to be so important relative to many other aspects of Karate. That being said, I still think it has its benefits. 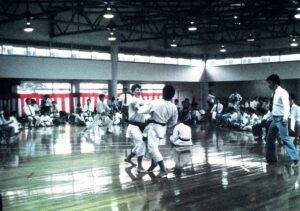 Some people are just not interested in competing. Some older practitioners consider tournaments an activity for young people. While it may be true that many attributes of athleticism deteriorate after one reaches his/her thirties, some qualities can continue to be improved for decades after that. Some people in their 60’s look better doing their kata than some of the best of those in their 20’s and 30’s now placing in tournaments. While athleticism plays a part in many competitions, some look beyond this. One should realize that the old saying is true: “It’s not whether you win or lose, but how you play the game.”

Some people feel that they simply are not qualified to compete, as they know many others who are competing are more likely to win. Competition should not be against others as much as against oneself. By this, I mean than one should push oneself to reach new heights previously thought unattainable. While tournaments may not be necessary as inspiration, they can be a good judge of progress.

Some instructors and senior practitioners feel embarrassed to be beaten by younger black belts, perhaps even a student. I have lost kumite rounds to people of lesser experience and ability than myself. In many cases, we both knew that outside of a tournament situation, there would be no doubt as to who was better. That being said, some big, strong participants often lose tournaments to small, weak opponents who, realistically, might not stand a chance in an all-out actual encounter. We must realize that tournaments are about points; they are a game. While this game may at times be realistic, it is not reality. For this reason, winning or losing should not be considered of the highest importance.

What, then, is the advantage to winning in a tournament? One of the biggest advantages I see to winning multiple-round kumite competition is the chance to gain more experience with various people. With more unknowns, this additional experience could be quite valuable. For this reason, I would be just as happy placing in the final rounds, regardless of which color the medal was (or winning no medal at all). Alternatively, I would rather just spend the time doing non-tournament practice with various people outside of a competitive environment than sit around waiting for my turn to compete. For kata competition, one of the main advantages of tournament performance over regular dojo performance is facing the added anxiety involved being publicly scrutinized. Who is a better kata performer is usually relatively clear. This is a why the same person may be seen winning the kata portion of a competition year after year, while kumite winners change (the best man does not always win, due to varying circumstances, including luck).

What might make a tournament more valuable than regular training? I think regular training is, generally, more valuable for overall improvement. If taking part in activities outside of regular dojo classes, I would also place training at outside seminars at higher priority than tournaments. But there is still value to tournaments and other extra-dojo activities. Sometimes these extra-curricular activities help as motivational tools and often help to bring family and friends closer to what you enjoy doing.

I see several potential negative parts related to tournament competition:
• For some competitors, tournaments are the reason for training. Competition is the means and the end. All their training is competition-oriented, if they train at all.
• Some competitors like to show off and are only there to win. Some competitors like to show off before the judge, their peers and the spectators, even if they do not win.
• Some promoters exaggerate the value of their tournaments in order to make unreasonable profit (profit is not bad, per se, but trying to convince competitors that the tournament is extremely important is).
• Some promoters put on tournaments in an effort to gain promotion within their organization, as tournaments are a way to get money and popularity for the organization.

I see these potentially positive facets to tournament involvement:
• As unrealistic as it might be, the experience can be valuable.
• Tournament training is better than no training at all.
• It helps spread understanding and appreciation (although sometimes not entirely accurate) of karate to those who otherwise might not have opportunity to see it.
• Watching and/or competing in a tournament, as well as meeting others there, can be fun.
• It can be an inspirational experience.
• Watching high-quality performance can be a good training aid.
• Observing mistakes in the performance of others can be a resource for self-evaluation.
• Concentration required in the face of anxiety can be valuable emotional training that may help in an actual self-defense situation.

To summarize, I think tournaments have many potential positive and negative facets. As with so many other aspects of karate, it generally true that much of what you get out of it depends on what you put into it.