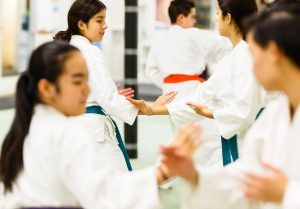 Kumite means, literally, “group hand.” The te is the same as that of Karate (“empty hand”), thus essentially an abbreviation for it. The kumi means “group” or “pair,” as in “practicing Karate in groups/pairs.” Kumite is usually translated as “sparring.” It can actually involve much more than simply trying out punches and kicks with someone else, though, to which sparring is often thought to be limited.

There are many types of kumite. Some may involve basic techniques, some free techniques. Some may not involve actual techniques at all. The idea is to train with another person or people, not just imagining opponents, as with kihon (basics) and kata (forms). Below are some examples of kumite variations typically practiced in Karate dojo and what I consider to be important training points of each. If you are not familiar with one or more of these types of kumite, please consult your instructor.

This is almost the same as the above multiple-step basic sparring, but involves only one step forward by the attacker. Often, the attacks are changed to include a few basic kicks and sometimes the defender is allowed to move off to the side, not only directly back. With all basic sparring, the attacker announces the attack, but the defender is allowed to change the block and counter, as long as it is done in basic form. Again, I believe that more time should be spent on this type of sparring, particularly the numerous possible variations. Again, emphasis should be placed on proper form, above all else.

Semi-free sparring usually involves the same techniques as in basic one-step, but the attacker and defender are allowed to move around in free-sparring stance until the moment of attack/defense. The completion of the attack and the counter should be in the full basic form. The block is sometimes abbreviated or left out entirely if a large, powerful (basic) block is not necessary. For those under black belt (and for many black belt holders as well), primary emphasis during this type of sparring should also be on proper form. There are actually many possible steps to take between basic one-step and free one-step. For more on this, please see my 12/98 article. For more on the free-sparring stance position, please see my 1/98 article.

Is “free sparring” really “free?” The attacker does not call out the intended target or type of attack and, in most cases, both people are allowed to attack at any time. But, as grabbing and certain attacks are not usually allowed, it is not really completely free in the sense of “anything goes.” There are many variations of jiyuu-kumite, ranging from two people chasing each other back and forth across the dojo floor, to one person being attacked by a group of mock adversaries. Techniques can be limited (e.g., only kicks). Speed can be altered. Time or space could be restricted. A specific timing may be trained. Various levels of contact could be used. Beginners are usually not allowed to practice free sparring, unless it is done very slowly and under the watchful eye of the instructor.

There are various other types of kumite drills. For example, in sets of two, one person can initiate a movement to one side or the other, or front or back. The other person must then follow, as a mirror-image. For more advanced practice, add arm/leg techniques and speed up. There is no contact in this example, yet it is still, officially, kumite. Other examples of kumite could involve timing drills, distance drills or practice of kata application, for example.

I noted at several places above that proper form should usually be the primary focus during sparring. There are, however, other points to consider. Speed, power and timing are obviously important, the relativity of each dependent on the focus of the class at the time and what the individual practitioners are attempting to accomplish. Other points are often much more subtle and may actually be more of a primary focus at a higher level of training. For example, a more advanced practitioner may be ready for anything during the entire time while practicing kihon-ippon kumite. Psychological and awareness training may be considered after having reached a high competence level in terms of physical form.

When practicing kumite, try to keep in mind what the aim of the practice is. It is not always just to “try to get the other guy.” Kumite is yet another learning tool. Furthermore, I would recommend that, just as with kata and kihon, once “advanced” sparring methods are studied, the practice of more basic sparring should not be discarded. Rather, these new methods should be added, as opposed to substituted. I would go so far as to say “a Karate practitioner who says he has nothing to gain from practicing basic sparring (or basic kata) does not understand basic sparring (or basic kata).”