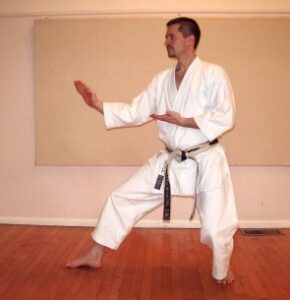 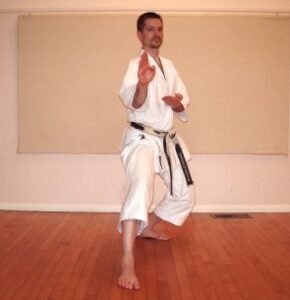 Kokutsu-dachi is one of the basic Shotokan stances. For information about zenkutsu-dachi/front-stance and kiba-dachi/side-stance, please see other articles.

Kokutsu-dachi should be approximately the same length as zenkutsu-dachi, but with no significant width. The forward foot should be pointing straight ahead (towards the opponent) with the rear foot perpendicular to it, knees of each leg pointing in the same direction as the foot. The front leg is only slightly bent. The back leg is bent nearly to the extreme. The weight should therefore be situated in excess of 80% towards the back foot. This stance is usually considered more “defensive” than the front stance. As with the front stance, I will not discuss hip movement/rotation in this article. There is some limited hip movement possible with this stance. But I am only concerned with an open hip position at this time, as this is the usual method employed during basics, assuming the stance is used while blocking.

Strength and stability
In this basic position, the stance is relatively stable and strong. More specifically, the torso’s position above the back leg is set very well. It is not that the front leg is very strong/supportive, because it is not. The reliance on the support of the rear leg allows the front leg to move without greatly affecting the rear leg and torso positions. As the front leg is not bent much, unintended movement of that leg would not greatly affect the position of the back leg and torso. This is perhaps one of the most important points to keep in mind during practice of kokutsu-dachi. There is not as much of a commitment (in terms of torso positioning) as there is with zenkutsu-dachi, although it is still a relatively strong position that could quickly change to the even stronger, more fully-committed zenkutsu-dachi if needed.

Variations
Moving weight forward/back, feet wider or further apart, feet angled further out/in than 90-degrees, higher/lower stance, knees facing other than the same direction as the toes… How do such changes affect your mobility and stability?

Mobility
When the feet are situated closer to each other, mobility may be enhanced. With the feet angled out further, movement to directions outide a 90-degree range become more easily attainable.

While it is important to study the static stances, it is also important to realize that, in reality, one should not expect to remain in any one stance for more than a second or two at a time. Stepping, shifting, turning, rising, falling and other motions come into play from the basic stance. One should consider options from the static stance. Some of the variables mentioned above may become even more important when considering what comes before or after.

Another point worth consideration is the relationship between the pull and push of the legs. Do you pull from the front leg, or push from the back leg when stepping forward? Or do you do both? If you do both, is it both at the same time, or first pushing, then pulling? Or perhaps push, pull, push? There are, of course, acceptable variations. But, generally speaking, there should be a combination of both pushing and pulling forces at work during the stepping motion. If the weight is further back, the reliance on the push portion increases, vis-à-vis the pulling action, at least for the initiating action. Likewise, when stepping back, the importance of the push off the front leg decreases, in relative terms, as the weight is situated closer to the back than the front in back stance.

The above can be further complicated when considering movements to directions other than directly to the front or back.

There are obviously many factors that should be considered when evaluating what an “ideal back stance” might be. I suggest experimentation to determine what is both best for you as an individual in an ideal situation, as well as what might be best considering the variables involved. There are accepted variations. But there are some variations that may not be advisable or accepted. As usual, for students, I suggest further discussion with your instructor(s) for clarification and more physical examples. For instructors, I hope this helps promote further technical study and possibly provide new ideas on what/how to teach or explain technique to students. As always, feel free to contact me with questions or comments.