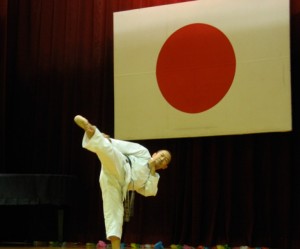 We are pleased to announce that Princeton Shotokan’s Kitagawa Sensei will be teaching here in March. Kitagawa (Takeshi) Sensei has been teaching karate for over thirty years in both Japan and the United States. In Japan, he worked alongside Nagaki (Mitsuru) Sensei (father of WKF World Champion, Nagaki Shinji) in Ehime Prefecture and was a senior member of the JKS. After moving to the United States in 2009, Takeshi has taught at the university level and within the public schools, and he is an active member within USA Karate, the national governing body. In January 2014, he was made head of the JKS in the USA and has taught extensively throughout America. He will be here March 22 & 23 (Tuesday/Wednesday) during our regularly-scheduled class times:

Fees:
For those who are not members of Silicon Valley Karate or who will have these be additional classes (for example, membership is 1x/week and these are the 2nd and 3rd classes for the week), guest fee is just $20/class. For those who normally attend these classes, an additional donation of $5-10/class is appreciated.