Some Good Training for Good Causes 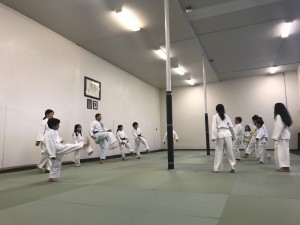 Every year in late December, in the spirit of special year-end training at dojos in Japan, Silicon Valley Shotokan Karate organizes a year-end punch-and-kick-a-thon. Dojo members collect pledges for charity donations and then do thousands of punches and kicks to earn the donations. It’s a great chance to help people and get in some intense physical training during the holiday season.

The event began 16 years ago, in 2005, as a kick-a-thon (before that, we were doing punches, starting in 1998), with the goal to do 2006 repetitions of front-kick for the coming year 2006. In 2013 we added punches for the adults to raise the bar, doing 2014 reverse punches — after completing 2014 kicks. Physically it’s a lot, even for well conditioned athletes, so many dojo members begin training months in advance to build the strength and stamina they’ll need. Everyone agrees they feel great when they finish.

The kick-a-thon has also grown beyond the SVSK dojo, with other clubs around the world taking up the challenge, too. We are hoping that 2022 will be our biggest year yet. Other groups are encouraged to participate in our event or create their own.

Selected charities over the years have included groups dealing with orphans, diseases and various food banks, among others. For a full list, please see below. In 2021, we are donating to…TBD. They are a great charity and are currently helping in the aftermath of recent California fires and are expected to be doing a lot more over the coming months.

list of charities benefiting from our annual kick-a-thon events:

Check here for updates and announcements to see when the kick-a-thon is scheduled. We look forward to seeing you there, whether in-person or virtually!