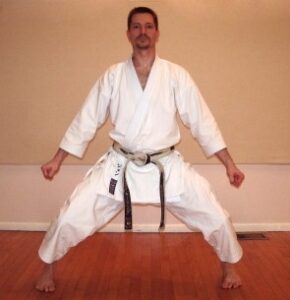 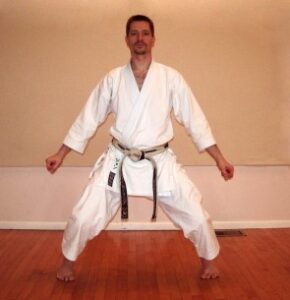 This is the third in a series of articles on the subject of basic Shotokan stances. For information about zenkutsu-dachi/front-stance and kokutsu-dachi/back-stance, please see articles I have written concerning those stances.

Kiba-dachi is usually the same length as zenkutsu-dachi (when facing the side), but with no significant width. The feet should be parallel to each other, with the knees just inside the line of the big toes.  The height of the stance is the same as zenkutsu-dachi and kokutsu-dachi.  The torso’s position is exactly in the middle of the two feet. As with the front- and back-stances, I will not discuss hip movement/rotation in this article. There is some limited hip movement possible with this stance. But I am only concerned with a straight hip position at this time, as this is the method employed most often during basics and kata.

In this basic position, the stance is relatively stable and strong toward the sides, but not to the front. Moving from side to side can be done relatively quickly, if the aim is to move only a matter of inches, using a shift or shuffle of the feet.  To move greater distance the sides, using steps (either cross-over or alternating), these movements become more awkward and unstable.   Moving forward/back while in this stance (in the direction the torso is facing) is unrealistic.  But using this stance while defending/attacking to the front/back is more practical.  And moving into or out of this stance from other stances should be something we can do with relative ease.

Moving weight forward/back or to one side, feet  further apart, feet angled further out/in than 90-degrees, higher/lower stance, knees facing other than the same direction as the toes…

As the feet move further apart from each other, the stance may become more stable (to a certain point).  When the feet are situated closer to each other, mobility may be enhanced. With the feet angled out further, movement to directions outside a 90-degree range become more easily attainable, with a resulting diffusion of power and control.

Huh?  How can the alignment be better in both situations?  Please see the following photos:

In the example on the left, the stance is performed roughly as most commonly practiced by Shotokan practitioners in modern dojo.  In the example on the right, it is performed closer to the way it was practiced 50+ years ago, at Shotokan’s early stages (the feet were actually even closer together when Funakoshi first brought his version of Karate to the Japan mainland in the first half of the 20th century).  Both have relative advantages and disadvantages.

With the feet wider, the imaginary line drawn between the feet and hip comes close to where the knees are.  With the feet closer, the knees are further from this line.   What this indicates is that when pushing toward the sides (shifting or stepping), the stance is more stable and powerful.

With the knees situated inwards of the feet, the legs are not in as good position to direct power or move to the front or back.  To change quickly and correctly to front-stance or back-stance while moving to the front or back from side-stance (as opposed to shifting in place) would be better accomplished by placing the knees directly above the feet (more specifically, situating the knee directly above the line projecting forward from the toes of the feet).

While it is important to study the static stances, it is also important to realize that, in reality, one should not expect to remain in any one stance for more than a second or two at a time. Stepping, shifting, turning, rising, falling and other motions come into play from the basic stance. One should consider options from the static stance. Some of the variables mentioned above may become even more important when considering what comes before or after. This can be further complicated when considering movements to directions other than directly to the front, back or sides, or combinations of directions in succession.

There are obviously many factors that should be considered when evaluating what an “ideal side stance” might be. I suggest experimentation to determine what is both best for you as an individual in an ideal situation, as well as what might be best considering the variables involved. There are accepted variations. But there are some variations that may not be advisable or accepted. As usual, for students, I suggest further discussion with your instructor(s) for clarification and more physical examples. For instructors, I hope this helps promote further technical study and possibly provide new ideas on what/how to teach or explain technique to students. As always, feel free to contact me with questions or comments.