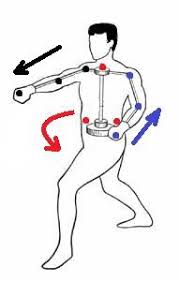 Many Shotokan instructors use the term “hip rotation” in almost every class they teach. The hips are definitely moving during most Karate techniques. But is it really rotational force driving the hips in the basic punches and blocks? I have a different view…

There is definitely use of rotational force in many techniques of Karate. But I believe that the term may be misleading when used to explain the application of force during many basic techniques, especially those delivered while keeping the feet planted. There may even be a somewhat rotating/circular movement of the hips coinciding with the technique’s delivery. But the force that is behind that technique may not be driven by this rotational movement, per se.

When you open or close a door, are you imparting rotational force on the side of the door that is moving (the knob side)? The door rotates around the hinged side of the door; there is no question that there is rotational movement of the door. But the force that is acting upon it is your push or pull that is probably fairly linear. Rotation of the door around its axis (the hinges) is the result of the force, not the cause of it.

Applying the same thought process to analysis of gyakuzuki (reverse-punch) executed while in a basic zenkutsudachi (front stance), you may come to realize that the hip rotation is more a resulting movement than a cause of force. The back leg’s push forward is fairly linear, or at least should be if the alignment is correct. The leg should be flexing and extending in such a way that the hip is moving directly toward and away from the target. The hip’s movement along a somewhat circular path (a relatively small arch that is almost indiscernible from a straight line) is a result of the push of the back leg. This force is, at best, curvilinear (curved line) in its projection.

The torso should be moving in the same manner as the hips. Therefore, the same theory applies to the shoulders’ “rotation.” The extended limb in most techniques is linear as well. So doesn’t it make sense that the force acting upon the moving limb is also linear?

To sum up:
The force is linearly projected from the push of the back leg towards the target in the same way that one pushes open a door. The hip’s swing around its axis (the unmoving hip) is a result of this linear force. It may be better to emphasize the linear push of the back leg, rather than the rotation of the hip, when trying to increase power and speed in the delivery of basic techniques.