Hikite (pull hand) – What Is It Good For? 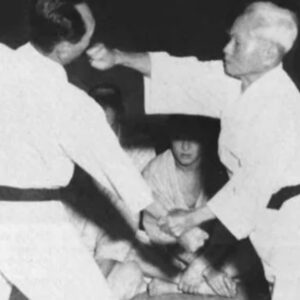 Many traditional Karate instructors will say that a punch, strike or block is not effective if not properly using the pulling hand on the other side of the torso; perhaps for balance, perhaps for added rotational power. Some will say that the pull represents an actual pull; pulling the opponent into the attack.

Regardless of what reasons are given, hikite has its functions. I believe, however, that there are some holes in a few of the more common theories.

Pulling the opponent in
Ever try to pull someone while you are punching? Not that easy, is it? Especially not for a smaller person to do to a larger person, as a self-defense situation would most typically warrant. More practical might be the idea that the “pulling hand” is stabilizing the opponent while the punching/striking arm moves into the target. Following this idea, try catching the opponent’s arm with one hand and punching or striking with the other. Instead of actually pulling back with the non-punching/striking arm, simply anchor yourself to the opponent at that point. In relation to the “push” of the other arm, this arm seems to “pull.” In actuality, that arm doesn’t really move much, but does inhibit the opponent’s movement, particularly his ability to pull his arm back. Your “counter-pull” may end up canceling out his movement, more than anything else.

Power
Hikite adds power through timing with the hip rotation? The pull of the arm does not really create significantly more power – in and of itself – in basic techniques as performed from static stances. It can, however, help when using some non-basic stepping patterns, including certain types of shifting and stepping. I will discuss one such pattern below.

Hikite adds power through coordinated tension? Not really. The idea of tensing/contracting various muscles to make a stronger technique is very good. But not all the muscles need to be tensed. In fact, contraction of some muscles can actually make a technique slower and weaker. Tension in the pull-hand may not detract from the power of the technique, but it may not add anything to it, either. See my article on “Tension vs. Relaxation” for related discussion. The muscles to contract are those located between the base of support (from the feet, where support from the floor is initiated, up through the hips) and the target (through the attacking limb into the opponent). If this “connection stream” does not include the pulling arm, why tense it?

Balance
According to Newton’s third law: “For every action, there is an equal and opposite reaction.” Pulling one side of the body helps propel the other side forward…right? Not in basics. This will be discussed further in a future article. Balancing the “pull” with the “push” doesn’t really make much sense for most basic techniques, as this will often cancel out a portion of the power we want to transfer into the target. If we want to transfer our power into the target, why would we want any part of our body directed away from the target?

Efficiency
Maybe it makes for a stronger technique somehow. Maybe it also makes for a good start for a big follow-up technique (this is one argument for a large hikite that I believe is worth seriously considering). But we do lose something when pulling back the non-punching/striking/blocking arm. That arm is then out of the way and less able to block/cover the opponent’s attack. It also takes that arm longer to move forward again to apply an additional technique. There are trade-offs when using a large pull-back of the arm. As long as these trade-offs are understood, there is nothing wrong with its practice. I see a big hikite action to have advantages and disadvantages, depending on the situation.

Example of good use of hikite
In addition to the idea of pulling that hand way back to prepare for a larger follow-up movement of the arm, perhaps even more important as a positive benefit to large hikite action can be that it may aid in promoting a large hip motion.  The pull of the hand, therefore, may be more of a means to an end, so to speak.  The forceful movement back of that hand may be more a training tool than anything else, as the pull of that hand is coordinated with the backward movement of the hip. The arm connects to the hip through the hand and the pull back of the arm translates into a pull back of the hips. This resulting hip placement puts us in a better position to deliver a strong counter-attack.

Here is an exercise that I believe can clearly demonstrate the value of a large, forceful hikite action that could benefit the overall technique:

Why is the hikite action more important in this technique than in basics? First, note that the attacking arm in this example does not have the benefit of a large amount of mass pushing into the target. The only thing that is really going into the target is the arm; not the shoulder, hip and other parts of the body that are usually involved when using a “normal” (forward shifting/stepping) pattern of attack. Because of this lesser effective mass going towards the target, we must rely on speed and timing more. The quick and forceful movement back on the pulling side of the torso helps propel the attacking arm towards the target. But, perhaps more importantly, it helps move your body out of harm’s way. This is an added benefit of the hikite action sometimes. Perhaps this is even more important than some other, more common ideas.

Another point to consider in this example technique is the use of the hips. As the left hip is moving in a large arch, the use of rotational movement may be very important in this type of action. The pull of the arm may aid in the application of this rotational movement, helping the hips move faster. But for control and efficiency, the pulling arm is not allowed to extend out from the body, as might have helped the rotation further if that were our only goal. Generally, the more the hip moves backwards, the more the pull of that hand helps that action become larger, faster and more forceful.

Conclusion: Hikite can be helpful. But the goals should be understood and the process made clearer, to be sure that we are training the proper points, instead of just mindlessly following what we are told.

post-script note: There is much more to say on this topic and an additional article is in the works…