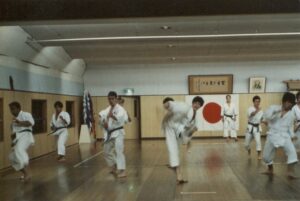 While there is nothing wrong with being enthusiastic about and dedicated to the art of Karate-do, extremely hard training may be counter-productive to skill development.

Most people I know (including me, recently) do not train nearly as often or as hard as would be ideal.  That being said, some people over-train and this can be just as bad or sometimes even worse.

Occasionally, it is good to do a few hundred, or even a couple thousand repetitions of a technique in a single day, or stay in a stance for 10-15 minutes straight.  Sometimes it is good to push your body a little further than what you thought it could do.  But it is dangerous if we go too far.  We could do damage to our joints or muscles, become dehydrated, cause injuries to ourselves and/or others during sparring if the hard training makes us careless…

Hard training is not without merit.  Under the right circumstances, it may be a very exhilarating, invigorating experience, especially in a group setting.

At the JKA Honbu (headquarters) dojo in Tokyo each year, at the last evening class of the year, students perform “senbonzuki”.  Most readers are familiar with “sanbonzuki,” which is “triple-punch”.  “Sen” is 1000.  Everyone forms a circle and each student counts 10 repetitions of gyakuzuki until everyone has counted.  Then, they switch sides and do it again.  This continues until 1000 repetitions are completed.  Sometimes, this is followed by maegeri or more gyakuzuki.

In my club, for the past few years, we have done the number of the upcoming year.  So, this past December 30th, we did 2003 reverse-punches.  We followed this with a couple hundred front kicks and some free-sparring.  Performing this many repetitions, one must relax and use only the necessary muscles.  Following this type of training with free-sparring, while it seems like it may be dangerous, if done slowly, lightly and carefully, it is a good way to drive home the idea of using the relaxation that the body just learned during the repetitions.

Occasionally training in this manner may be good for reaching beyond psychological or physical plateaus.  But doing this on a regular basis can be counter-productive.

When I first arrived in Japan for training in 1985, I trained 3 hours every day.  On days I missed one class, I made up for it by doing 4 hours the next day.  After I started working, I could no longer keep up this pace, but still managed to get in over 10 hours of training per week most of those initial 3 years I was there for training.  When I returned to Japan for 5 more years, this time primarily for my job, my work schedule would not allow for more than a few hours of training per week.  When I look back on my development, I realize that although my physical advancement was fastest during the time I trained the most hours, I advanced more per-hour with less hours of training time.

What is the optimal amount and intensity of training?  It depends on the person and situation, as well as the goals of the individual.  Personally, I wish I had the time to train 2+ hours of karate each day and supplement this with another 2+ hours of cross-training, 5 or 6 days each week.  But I do not have the time nor financial freedom and even if I did, my body could no longer support that kind of physical rigor.  I think that most people do not get as much exercise as they should, even many of those enrolled in karate classes and even many of those who are instructors.  Some people try to make up for missing training for a few months by training intensively for a couple hours per day for several days at a stretch.  Training consistently and in a productive environment is imperative, whether done in a dojo with others or independently.  Supplementing this with occasional “gung-ho” training, under the right circumstances, can further enhance your skills.

Train hard, but not too hard.  Train smart, but don’t neglect the physical side of training and just theorize.  Above all, enjoy it!