(This article originally appeared in the April 2006 issue of ShotoMag.)

One of the first techniques we learned, gedan-barai (literally “lower-level sweep” but commonly known as “down-block”) is something we have all done many times. It is a very useful technique and its prevalence in Shotokan kata suggest that the masters of old thought it worth much practice. In some dojo, every turn in kihon/basics is accompanied by gedan-barai.

In this article, I would like to first review parts of the basic technique itself, as a lead-in to my points of what are benefits and drawbacks of making a habit based on this technique.

Getting the blocking arm to end in the correct position and the other arm to end on the hip is important. But we also need to consider how we got our arms where they end up. I would like to focus here on the “chamber” position. In basics, we should generally try to make techniques as big as possible. And the chambering is no exception.

In photo 1, you can see that the hand that is to be used as the block is pulled to above the opposite shoulder, in a large preparatory movement.
1 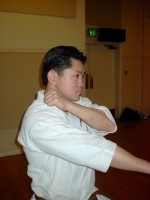 In photo 2, you can see that an improvement has been made. The hand is rotated to situation the palm toward the head. This means that the wrist/forearm will turn as the blocking arm is extended. (the value of this wrist-twist is explored in an article on my dojo website, www.jkasv.com ).
2 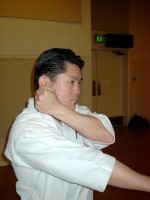 In both of the above photos, you can see that the elbow is low. This helps keep the shoulder from rising excessively and also helps keep the line of vision clear. As much as is possible, the hand is pulled back to the shoulder, not just in front of it.

This big and correct preparatory move will help the technique. So it is good to get this position into our “muscle memory,” making it a habit that is hard to forget.

So why do so many of us forget sometimes?

When to Work on Keeping the Habit

See photos 3-5, below. This is, I believe, quite typical of how this move is performed in the opening sequence of Heian Sandan:
3 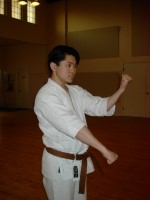 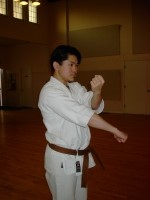 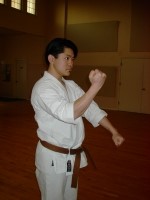 See photos 6 & 7, below. This uses the correct (big) preparatory (chambering) position that we spent so much time working on when doing gedan-barai as a solitary technique. Why not keep this habit when combining the technique with uchi-uke in this kata?
6 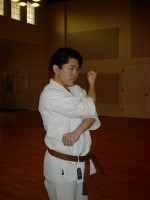 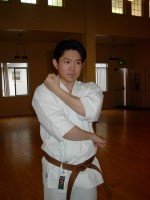 Other examples in kata where we may see this happen is in the first move of Jion, several times in Jiin and in Tekki Sandan. Related moves include manji-uke, which occurs many times in kata. This gedan-barai/uchi-uke combination actually appears in over half of the Shotokan kata. So I think that working on this point could be of significant help, not just to this particular example movement in Heian Sandan.

Credit where it is due: The above point was brought into focus for me in 1999 when Amos (Richard) Sensei was teaching a seminar and showed me myself on video as he explained where he saw my technique as benefiting from larger movement.

When to Work on Not Keeping That Habit

There are plenty of cases in kata where there is a gedan-barai or tetsui-uchi (hammer-fist strike, which is basically just a gedan-barai executed to a different height) that we precede with the habitual gedan-barai chambering position, as detailed above.

But should this be how we perform this move? Is there some application of the move we should consider in addition to simply a chambering/preparatory move?

As an example, please see photos 8-10, below, from the opening sequence of Heian Nidan. I believe these photos are a fair representation of the way most JKA-style Shotokan people perform these movements.
8 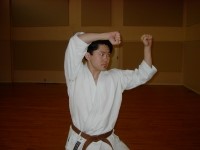 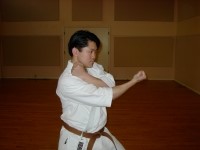 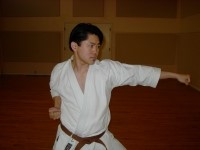 Now see photo 10, below. Almost no matter what application is envisioned for this move, it seems to me that placing the non-punching/striking arm more vertical makes more sense from an application standpoint. Personally, I view this technique at the most basic level (not considering grappling possibilities) as a soto-uke (outside block). Either as a block or an arm-bar, having the arm in this position makes more sense to me.
11 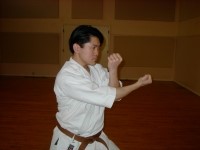 See also photo 11, from Heian Godan, photo 12, from Empi, photo 13, from Nijushiho. Considering the above, should we be placing the arm more vertical for these as well? Shouldn’t they all work as blocks?
12 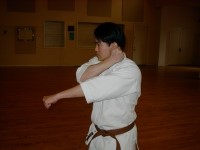 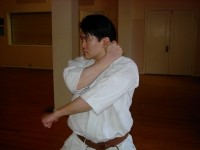 One may argue that some of the moves listed above are simply preparation for the block or strike to follow. If that is all there is to it, then fine; making this movement work as an outside block may not be a concern.

But if we are considering the possible blocking applications of the non-punching/striking arm in these techniques, I think it makes sense to at least be able to break the gedan-barai habit.

So why not just perform gedan-barai with a chamber position that involves a soto-uke? I think this may make the move smaller and thus, for a beginner, not maximizing our point of working on techniques that are as large as possible. It also then breaks the alignment of the path of the technique. Gedan-barai should involve an extension of the arm that projects the hand directly in a straight line as opposed to curving toward its final position. If we pass through a soto-uke position on the way to the normal chambering position, the only drawback to this that I see is a slight increase in overall time it would take to complete the technique, as it is then a little less direct/linear.

Credit where it is due: This idea had been something I had thought about for many years but was really driven home during some of the classes and discussions I have had with Ubl (Steve) Sensei over the past few years.

Take a look at your basic gedan-barai and see where the preparation habit should and should not appear. I think this is a point worth thinking about.)