There are many good books on the market that explain techniques and practice methods of the martial arts.  (There is also a lot of garbage out there, but that is not the point of this article)   Many of these books contain excellent photographic examples and are worth studying for their form. 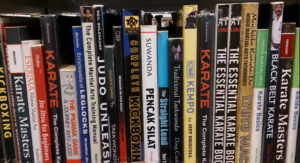 So, why not train like these pictures – at least the good ones?  While these may be fine examples of how one should look at completion of a technique/movement, this is far from the “complete picture.”  Even a sequential set of photographs cannot fully show the finer points of movement between the techniques.

I sometimes tell students that “training is not pictures; it is video.”  The movements between the static pictures are very important.  Sometimes, they are actually more important than the position at completion of the technique or movement.  We should not be satisfied with simply having good positioning at the moment the technique is completed.  We should strive for proper, efficient, effective technique throughout the entire movement.

If someone is performing kata and looks very good in each stance, but habitually rises and falls in height (incorrectly) while stepping between these stances, are the techniques truly good?  I do not think so.  While a beginner can get away with flawed performance, more advanced karateka cannot (or at least should not).  In kumite, these flawed movements can cause the loss of a point in a competition or, even worse, an injury.  And in a real-life self-defense situation, the lack of complete control throughout techniques could mean the difference between a very real success and failure.

Following are some examples of common flaws between (or before or after) techniques
– From ready position (either from basic gedan-barai or jiyuu-kamae), the punching arm moves back before moving forward for the punch.  This increases total elapsed time to target and gives away your intention to opponent.
– When punching, blocking or striking, the shoulder of the attacking arm is raised momentarily.  This is inefficient/excess use of energy and gives away intention.
– When kicking (mae-geri, mawashi-geri, yoko-geri), the foot is not brought up close to the body before extending into the target but instead drags close to the floor.  This results in a smaller snapping motion and/or less direct movement toward target from the body’s center.
– Making only the final portion of a movement fast.  This reduces effectiveness and realism, allowing opponent more time to react.
– Lack of zanshin after completion of a technique.  This “remaining spirit” is the awareness that allows us to more easily and quickly react to whatever might come next.

One of the most common problems facing many of us is the counter-productive use of exertion.  This could be physical, such as when tensing the muscles too early in an effort to put more power into the technique.  This could also be non-physical, such as frustration or over-enthusiasm.  In these situations, we may find that the final position of the body may be proper, and therefore on the surface look like a good technique.  But, in fact, the execution of the technique may have been completely ineffective and therefore the technique as well would be lacking.

In an effort to better see our shortcomings I would advise periodically videotaping performance – either in class or at home – and evaluating not only the final positions of the techniques, but the entire range of the movements.  With digital video, this analysis can be done quite easily, as the slow-motion playback on a good digital video-camera can show crystal-clear picture quality.  We should try to be objective when watching our own performance and be open to the opinions of others who might also be watching.  As usual, we should be trying to improve our techniques and ourselves, not just to look good for a moment.