More interested in subjects such as biomechanics, I was hesitant to write an article on etiquette. But this subject was requested by two different people in July. So here goes…

General Etiquette
I do not wish this article to be overly detailed, as etiquette does differ greatly from place to place. What is considered acceptable 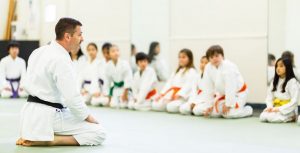 in one country may be considered rude in another. Etiquette followed in a children’s class may differ from what goes on in a college class, which may also differ from how things are done in a class filled with older practitioners. If what I write here does not make sense to you, please feel free to question it. My experience is mostly limited to life and training in the US and Japan, and the situation may be different for you for reasons of culture or lifestyle. My feeling, though, is that at least some basic rules of good etiquette should be followed while training. 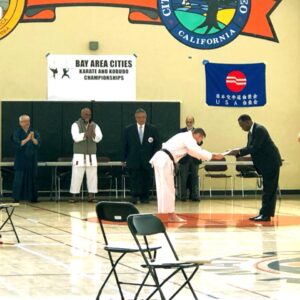 “When in doubt, bow” is an concept I adopted when I first arrived in Japan. This, I believe, helped me greatly to gain acceptance in the dojo. Humility is generally considered a virtue in almost every culture. But perhaps this is especially true in Japan.

Bows are required at most dojo when entering the training area, when greeting the instructor, before and after kumite sets, before and after kata sets, and various other times. There is of course a chance that one could bow too much. But better too much than too little, I think.

For more on bowing, please see my article on that subject.

Osu
This term is often used in traditional Karate dojo. It is not, however, used by ALL martial artists. It is not even used by all Karate practitioners. If nobody else you know says it, maybe you should not either. If your entire dojo says it, maybe you should as well. It should be noted, however, that the term is really limited in its usage to greetings and accepting criticism. “Osu?” as a question, for example, makes no sense whatsoever.

Coming to training late, missing class, visiting another dojo
The rules for all of these may differ greatly from one dojo to another, even within the same organization and even within a 10-mile area. Some instructors demand students call in advance if they plan on being late to class or missing class. Some students are required to sit in seiza for several minutes before being allowed to join a class already in progress. Some instructors do not allow visitors to train without watching at least one class first and asking permission formally. I do not require so much formal etiquette in my dojo. I do, however, demand that students at my dojo train seriously while in class, even if they can’t make it to every class and work keeps them from making it on time sometimes. 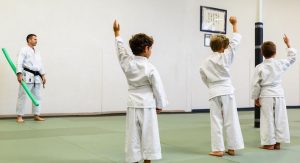 Some instructors do not like students to ask questions. In my experience, it seems that most of these instructors are afraid of not knowing the answers. Some questions are better left unasked and/or unanswered, such as if a beginner asks a question about an advanced kata or sparring combination he saw a black belt performing. Personally, I enjoy answering questions from students; it is usually a sign that they are thinking, which is generally a good thing.

Anarchy isn’t so great and discussion time in class should be limited in an effort to maximize physical training time. But occasional questions on the subject being studied in that particular class can sometimes help not only the questioning student but also other students (and sometimes even the instructors). This provides the opportunity for all involved to rethink what they are doing such that they might improve faster than simply repeating the physical movements over and over.

Sensei/Seito
Sensei is the title of the instructor. I will go into more detail in a future article on the exact meaning of this and other Japanese terms. But for now, suffice it to say that the Sensei is the instructor and the seito is the student. In Japanese, the title comes after the name. In most western countries, the title (such as Mr.) comes before the name. In the west, therefore, it is acceptable most places to call an instructor “X Sensei” or “Sensei X.”

Personally, I don’t really care if my students call me “Sensei” or “Jon.” But I would not like to be called “Sempai” or “Keeling.” “Sempai” is an incorrect term for a student to use when addressing an instructor. And calling someone by family name (without a title, that is) is also generally considered rude even in the US, at least according to my upbringing; and this is especially true in Japan.

Please note: Titles such as Sensei used by someone referring to him/herself is usually a sign that that person is not worthy of that title, or at least lacks humility. The only real acceptable exception to this might be when addressing children who do not yet understand social etiquette, as a way of enforcing a degree of order and discipline, such as when a teacher in grade school tells her class that she is “Mrs. Smith.”

One thing strange I have noticed recently, particularly in the US, is some individuals seem to try to “claim” their sempai status. As an example of this, there are some who will make a point of pushing toward the senior end of the lineup whenever possible. It seems to me that many of the people doing this may be undeserving of their rank. Ability should be clear enough that the junior practitioners provide space for their seniors at the senior end of the lineup. Of course this is a two-way street. Many of the lower ranks simply do not realize the ability of their seniors. When in doubt, though, it is usually considered a sign of good etiquette and humility to only line up ahead of those who offer you a position on their senior side.

Souji (cleaning)
It is a custom of most traditional dojo to clean at least the floor of the training area before and/or after class. In my dojo, it is done before class, as we train in a fitness club and the room is used by other groups during the day. Some dojo use damp rags, others use dry rags. Still others use mops or brooms.

Some claim that the cleaning process is symbolic of a cleansing of the soul or a polishing of the spirit or some such thing. Whatever…cleaning is cleaning. If you want to think deeply about it, feel free. But just make sure you don’t miss a spot; that’s far more important.

In most dojo, the Sensei do/does not clean the floor with the students. The main idea with this seems to be that the instructor has put in many years cleaning the floor and deserves a break. Another idea is that the students are the ones training on the dojo floor and thus should want to have a clean surface on which to train. When there are only a few students in the room when my dojo floor is cleaned, I usually join in. I may not clean as much as some of the students do, but I do bring the bucket of rags home each night and rinse them through. This takes far longer than cleaning the floor. So I don’t feel guilty about letting students clean a little more than me sometimes.

In the JKA Honbu dojo in Tokyo, instructors do not take part in the regular class cleaning of the floor. But the instructors have a separate, more thorough cleaning of other areas of the dojo on a regular basis. This is true of many other dojo as well. So although many instructors may appear to be slacking, they often are simply reallocating their cleaning time.

Summary
No matter what your particular dojo may require in terms of etiquette, remember that actions speak louder than words. Bow deeply and show respect where it is deserved. But don’t spend too much time thinking about proper procedure at the expense of actually showing proper etiquette. Do what you feel is right. If you mean to show respect and good etiquette, but end up saying the wrong word by accident, this will not really matter all that much. Your true intentions usually show through. People usually see others for who they really are.

For more on dojo etiquette, please see the Yale dojo site. (I found this site just after I finished writing this. Coincidentally, it includes many of the same points.)