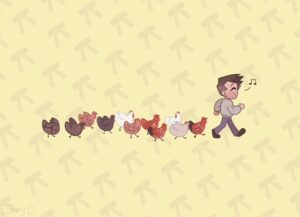 As many readers are already aware, there is an interesting website devoted to Shotokan called “24fightingchickens”.  This article has nothing to do with that…

Chicken Head
What I refer to as “chicken head” is the tendency for the head’s forward movement to precede the rest of the body when stepping or shifting forward.  If you watch the way a chicken walks (or quite a few other types of birds, for that matter), you can clearly see that it uses the initial movement of its head to propel the rest of the body forward.  This has much to do with the chicken’s limited leg/hip mobility as well as that its arms/wings are typically not involved in the movement.  With off-center counterbalances lacking as such, the forward movement must be initiated by some part of the center moving forward.  And the head is the most suitable candidate for these fowl.

In much the same way as the chicken, some people appear to propel their body forward, at least to some extent, by using an initial forward movement of the head.  In strict basic technique, we are often required to use limited arm movement (off-center counterbalances) and keep the hips in a fairly straightforward trajectory.  As such, it is understandable that a “chicken-head” tendency may develop quite naturally.

We must, however, force ourselves to limit such movement.

Chicken Wings
Similar to “chicken head”, “chicken wings” refers to the movements of the arms that some people perform while executing kicks.  It can make the karate person appear to be moving like a chicken, or other type of bird.

The arms are supposed to be kept still, with the elbows back.  But again for reasons often relating to lack of other suitable counterbalances, the elbow moves in an (usually unconscious) attempt to aide in the movement of other parts of the body (the kicking leg, the overall forward movement of the body).

Don’t be a Chicken!
Watch yourself in a mirror, have someone else watch you, or videotape yourself.  Are you looking like a chicken sometimes?  While some of these movements may be fairly natural, we must train ourselves not to do these things.  Why?  While I can explain how it makes the movement less efficient and technique less effective, what should be very obvious to even the complete novice is that this movement can be seen quite easily.  And especially considering that these movements often precede the technique itself, these “chicken movements” can give the opponent a relatively clear indication that an attack is coming their way.  So don’t be a chicken!

post-script note: That image at the top was made by one of my teenage students after helping work in my garden, watching me get our 11 chickens back into their coop.