Most students of Shotokan learn about “C-stepping” within their first few classes as a beginner. “C-stepping” involves describing the shape of a “C” when stepping forward or back in zenkutsu-dachi (front stance). While it feels like an unnatural movement at first, over time this type of stepping becomes second-nature; so much so that we often forget that we do it, or why we do it. 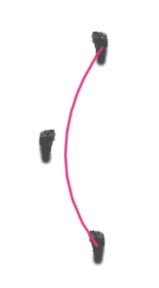 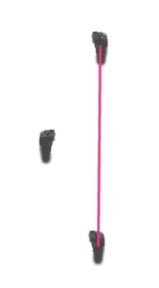 C-stepping while moving forward/back
The accentuated movement of the moving foot towards and away from the stationary foot can make the step more dynamic.  With a greater overall movement, all else held constant, the larger range-of-motion can help the movement become more powerful.  The use of “contraction/expansion” is more dynamically employed in this action.   A side-benefit of this type of step can be the ability to step inside an opponent’s guard more easily.  Also, when using kicks such as maegeri (front kick) and other stances moving forward/back, the moving foot almost definitely must come toward the stationary leg.  Considering all these points, it is almost universally considered advantageous to teach this type of stepping to beginners.  The only real question is, do we need any other options?

Direct-stepping while moving forward/back
The direct movement of the stepping foot means that, all else held constant, the time it takes to step should be reduced.  Even though C-stepping may be stronger, that does not matter if the opponent is fast enough to get in or out while this more time-consuming type of stepping is employed.  This type of stepping can be more efficient.  The intermediary position in this type of stepping (heikodachi) is also more stable than that in C-stepping (heisokudachi).  An opponent’s well-timed foot sweep could much more easily take out both feet if the feet are placed too closely together.  Also, if things do not go as planned partway into the technique, having a wider base of support is more advantageous when considering alternative movements. Although there are many advantages to using this direct-stepping, it should be avoided when doing many basic kicks and stepping into certain other stances, and therefore its use is generally considered by most instructors to be reserved only for those who have relative mastery in the C-step.

C-stepping while moving in directions other than forward/back
The accentuation of contraction/expansion dynamic motion can become even greater when stepping in directions other than directly forward and back.  Starting with the left foot forward, stepping forward with the right foot to further to the right than usual, the foot moves in a longer path, making it a more dynamic motion.  Again starting with the left foot forward, if stepping forward with the right foot toward the left of the left foot, there really is not much option; the stepping foot must come to the stationary foot in the middle of the stepping motion.

Direct-stepping while moving in directions other than forward/back
While stepping to the left in the above example is obviously better done by bringing the stepping foot close to the stationary foot, stepping to the right may be better accomplished with a more direct route of the moving foot.  While a direct path may be less dynamic, the decrease in overall time for execution of the step may be worth it.   Also, as mentioned above, the widened intermediary stance provides for more stability in case things do not work out as planned.

How about something in the middle?
If there are advantages to C-stepping for certain situations and advantages to direct-stepping for others, what is wrong with doing something in the middle as a compromise?  Nothing.  At least if it is a compromise that doesn’t benefit from the training value of the extremes. C-stepping, direct-stepping and the entire range between them are all acceptable to me.  Of course for a given situation, one may be better than another.  And it also depends on what the point of the particular class is.   Overall, though, I believe the best way to step forward/back in front stance is probably somewhere between the two extreme examples examined above, at least once the relative value of each is understood and sufficiently trained.  When in doubt, students should ask their instructor(s) which way is desired and/or if more than one way is acceptable.

Summary
As with many of the other concepts I introduce in these articles, I believe that one should examine a variety of methods in order to understand and appreciate the advantages and disadvantages of each method.   Furthermore, what works well for one person may not work as well for another, due to differences in speed, size, agility, etc.   Being comfortable in a range of different methods should make one better able to deal with various situations.