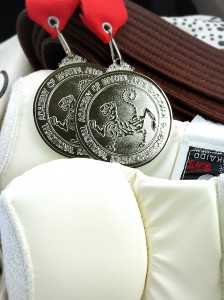 We had two competitors at a tournament on March 5. And those two each won silver.

We had five competitors at today’s tournament and came away with a 4th place (out of a division of 19), a bronze, two silvers and a gold.

We are expecting many more to compete in the April 9 tournament in South San Francisco.

Our Chief Instructor acted as a senior referee at each of the March tournaments and will be in his usual role of Chief Referee at the one on April 9.